A small reference to Santorini’s History

It is the most active volcanic centre in the South Aegean Volcanic Arc, though what remains today is chiefly a water-filled caldera. The volcanic arc is approximately 500 km (310 mi) long and 20 to 40 km (12 to 25 mi) wide. The region first became volcanically active around 3–4 million years ago, though volcanism on Thera began around 2 million years ago with the extrusion of dacitic lavas from vents around the Akrotiri.

The island is the site of one of the largest volcanic eruptions in recorded history: the Minoan eruption (sometimes called the Thera eruption), which occurred some 3,600 years ago at the height of the Minoan civilization.The eruption left a large caldera surrounded by volcanic ash deposits hundreds of metres deep and may have led indirectly to the collapse of the Minoan civilization on the island of Crete, 110 km (68 mi) to the south, through a gigantic tsunami. Another popular theory holds that the Thera eruption is the source of the legend of Atlantis.

Volcanism on Santorini is due to the Hellenic Trench subduction zone southwest of Crete. The oceanic crust of the northern margin of the African Plate is being subducted under Greece and the Aegean Sea, which is thinned continental crust. The subduction compels the formation of the Hellenic arc, which includes Santorini and other volcanic centres, such as Methana, Milos, and Kos.

The island is the result of repeated sequences of shield volcano construction followed by caldera collapse.[13] The inner coast around the caldera is a sheer precipice of more than 300 metres (980 ft) drop at its highest, and exhibits the various layers of solidified lava on top o

f each other, and the main towns perched on the crest. The ground then slopes outwards and downwards towards the outer perimeter, and the outer beaches are smooth and shallow. Beach sand colour depends on which geological layer is exposed; there are beaches with sand or pebbles made of solidified lava of various colours: such as the Red Beach, the Black Beach and the White Beach. The water at the darker coloured beaches is significantly warmer because the lava acts as a heat absorber. The area of Santorini incorporates a group of islands created by volcanoes, spanning across Thera, Thirasia, Aspronisi, Palea, and Nea Kameni

Excavations starting in 1967 at the Akrotiri site under the late Professor Spyridon Marinatos have made Thera the best-known Minoan site outside of Crete, homeland of the culture. The island was not known as Thera at this time. Only the southern tip of a large town has been uncovered, yet it has revealed complexes of multi-level buildings, streets, and squares with remains of walls standing as high as eight metres, all entombed in the solidified ash of the famous eruption of Thera. The site was not a palace-complex as found in Crete, but neither was it a conglomeration of merchants’ warehousing, as its excellent masonry and fine wall-paintings show. A loom-workshop suggests organized textile weaving for export. This Bronze Age civilization thrived between 3000 and 2000 BC, reaching its peak in the period between 2000 and 1580 BC. 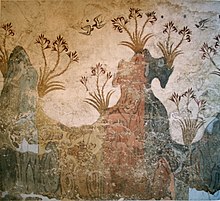 Springtime landscape in a Fresco from the Bronze Age, Akrotiri

Many of the houses in Akrotiri are major structures, some of them three storeys high. Its streets, squares, and walls were preserved in the layers of ejecta, sometimes as tall as eight metres, indicating this was a major town. In many houses stone staircases are still intact, and they contain huge ceramic storage jars (pithoi), mills, and pottery. Noted archaeological remains found in Akrotiri are wall paintings or frescoes, which have kept their original colour well, as they were preserved under many metres of volcanic ash. The town also had a highly developed drainage system and, judging from the fine artwork, its citizens were clearly sophisticated and relatively wealthy people.

Pipes with running water and water closets found at Akrotiri are the oldest such utilities discovered. The pipes run in twin systems, indicating that Therans used both hot and cold water supplies; the origin of the hot water probably was geothermic, given the volcano‘s proximity. The dual pipe system, the advanced architecture, and the apparent layout of the Akrotiri find resemble Plato‘s description of the legendary lost city of Atlantis, further indicating the Minoans as the culture which primarily inspired the Atlantis legend. 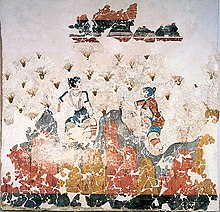 Fragmentary wall-paintings at Akrotiri lack the insistent religious or mythological content familiar in Classical Greek décor. Instead, the Minoan frescoes depict “Saffron-Gatherers”, who offer their crocus-stamens to a seated lady, perhaps a goddess. Crocus has been discovered to have many medicinal values including the relief of menstrual pain. This has led many archaeologists to believe that the fresco of the saffron/crocus gatherers is a coming of age fresco dealing with female pubescence. In another house are two antelopes, painted with a kind of confident, flowing, decorative, calligraphic line, the famous fresco of a fisherman with his double strings of fish strung by their gills, and the flotilla of pleasure boats, accompanied by leaping dolphins, where ladies take their ease in the shade of light canopies, among other frescoes.

The 1956 Amorgos earthquake resulted in the demolishing of many buildings in the north of Santorini, leading to the desertion of many of its villages. The expansion of tourism has resulted in the growth of the economy and population. The major settlements include Fira (Phira), Oia, Emporio, Kamari, Perissa, Imerovigli, Pyrgos, and Therasia. Akrotiri is a major archaeological site, with ruins from the Minoan era. Santorini’s primary industry is tourism, particularly in the summer months. In 2007, the cruise ship MS Sea Diamond ran aground and sank inside the caldera. The island’s pumice quarries have been closed since 1986, in order to preserve the caldera. Santorini was ranked the world’s top island for many magazines and travel sites, including the Travel+Leisure Magazine, the BBC, as well as the US News. An estimated 2 million tourists visit annually.